“If you didn’t stay on the track, you’d fall off a cliff and die.”

We caught up with Ryan days after he landed back on Aussie soil, still bright eyed and bushy tailed from what might have been the most intense riding of his life, and a ride few of us will ever be skilled enough to compete in, even at the lowest levels. Ryan, looks like you had some pretty gnarly riding at Romaniacs. For the uninitiated, can you tell us a bit about what Romaniacs is, and how it started?

Romaniacs is crazy! It’s a 5-day hard enduro rally in Romania. The race started in 2004 and was the product of Martin Freinademetz’s madness. Day one is a prologue in the middle of the city (Sibiu) and days 2-5 are forest days in the Carpathian Mountains, which involves following your GPS, blue tags and going through checkpoints. Each day has one service point where the bike is checked over and riders can rest and eat for 25 minutes. On a forest day, you can expect lots of creeks, flowing trails and steep hills. In the morning you can be down in the bottom of a valley riding in the trees and later riding up in the clouds above the tree line at 2000m above sea level, where the wind almost blows you off the bike.

Can you tell us a bit about the different riding classes in Romaniacs, and what the terrain is like?

There are four classes: gold, silver, bronze and iron. Picking the right class is vital as the gaps in between them are huge. Someone who can ride bronze easily would find silver very hard, almost impossible. Iron is a challenging trail ride, short days of around 3-4 hours for the fastest riders, and around 130-150 km. Iron may be the easiest class but it is still in the world’s hardest race, so don’t take it lightly. Bronze would be the same as the hardest tracks in Australia. To do bronze, you should be able to ride hard, slippery tracks and up to 200 kilometres a day. You should expect big steeps hills and rocky creeks with lots of flowing trails.

Silver is best described as “almost impossible,” with crazy steep hills which were slippery due to the rains, lots of creeks and flowing trails. Silver is a big step from bronze difficulty-wise, but also what silver has that bronze doesn’t is a big fear factor. If you fall off, your bike is stuck until someone helps you, or until the trail sweeps come at the end of the day. There were downhill sections where if you didn’t stay on the track, you’d fall off a cliff and die. Silver challenges even gold riders, though not as much as us mere mortals. Even Graham Jarvis said silver was no easy ride.

To ride silver you must be prepared to give a year of your life to train and push yourself because, in this race, you can never train enough. To ride gold class, you must be a freak of nature. You have to have incredible bike control and skill as you’ll have to ride up the steepest, slippery trails you will have ever seen. There is a reason why only a few riders in the world can finish the gold class. I did ride some gold hills before the event and I was able to get up some of them (not very pretty) but you have to be able to ride them fast as there are lots of hills.

There was a great variety of terrain, from pine forest to riding up on the tops of a mountain in what is called “bear brush”, but in general, there is no undergrowth like Australia due to the cold winters. This means when you’re riding you usually have a lot of line choices going up and down hills. Though really, there’s no such thing as a “hill” in Romania; it’s a mountain or nothing. Sometimes, you spend hours climbing a mountain -- something we just don’t have here in Australia. As the youngest Australian rider you wanted to do this because...?

I love to be challenged and this race really challenges you. The terrain is challenging to ride and the days are long, you have to be skilled and fit but also to be able to focus for 8-9 hours, and you need to be able to manage your bike throughout the day (not blowing it up, not breaking parts, keeping coolant in it). And you need to take care of yourself, especially making sure you eat enough food as it’s really hard to eat at the end of a long day. 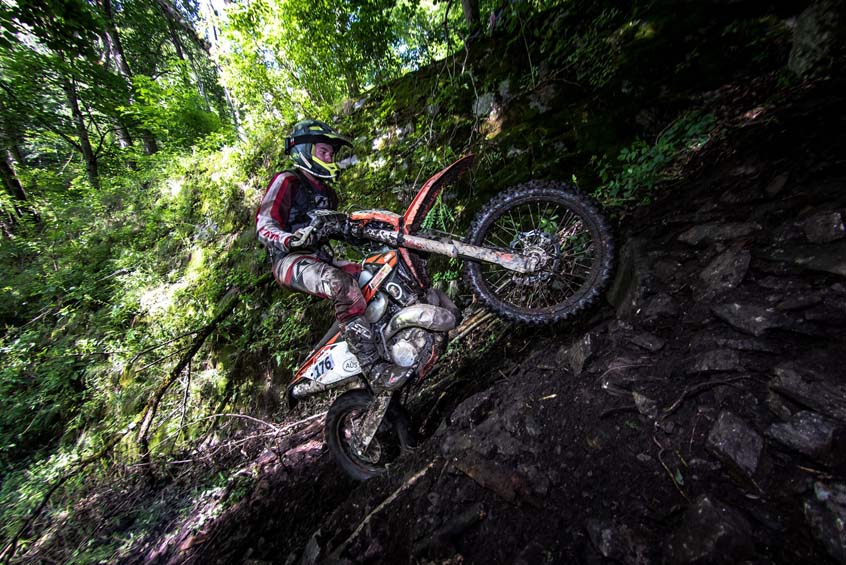 Can you give us a short recap of each day’s ride?

Day one was a prologue, a 3-minute enduro cross track to decide the start order for day 2. You’re only allowed one go on the track, which I actually really enjoyed. Besides getting caught up behind another rider and losing some time, I had a smooth run.

Day two was the first forest off-road day. Before lunch were two mountains, a few creeks and some gnarly downhills which I enjoyed. After lunch included more hills and creeks but the day ended at a section where the track was a knee-deep mud hole uphill where you had no choice but to help pull other riders up. This meant myself and almost all of the silver class timed out due to losing too much time.

Day three was based around the ski field where we were staying. That day had lots of hills but I felt I was making good time. Then just before lunch, I went over the handlebars and bent my front disc, and had to stop and bend it enough to get it usable again.

After lunch was the usual tough track. At the end of each day, there is usually a crazy section to try and break you. Day three’s section began near the end of checkpoint 8. I slipped off the side of the track and had no choice but to ride back down the hill to the creek, just before the checkpoint. I was told not to try the section again as the time bar for 8 was about to start, and I wouldn’t make it time for 9.

Day four I felt more rested than I did on day three. There were more flowing trails and the hills were much drier, so they were holding together better after the first riders. I made it to the lunch point in good time and felt okay. After lunch, there were a few tough sections but nothing was dug out until about checkpoint 8.

After a crazy five metre drop into a creek (which I slid down next to the bike), was a grass hill bog hole which I lost a bit of time on, followed by more downhills where many riders were lined up. I lost more time waiting for the riders to clear, and just before checkpoint 9, I lost more time on a gold/silver section due to a line up of riders.

At checkpoint 9, I timed out by 30 minutes. Day three was meant to be the easiest day but more people timed out than on day two.

Day five was the easiest day, but I started with no energy and no sleep. I fell off many times on the easiest fast section before lunch, but I still managed to make some places going up the hills. What were some of your shining Romaniac moments?

Getting to the finish. The last day I survived purely on adrenaline. I was more relieved I didn’t have to race any more days -- I was toasted. Never have I had to work so hard in my life. Pretty much every steep downhill. I would try and ride them all to save time and energy but they get out of hand really quickly, so I would bin the bike into the hill or try and hit a tree to stop me. How was the community at Romaniacs? Supportive, challenging?

On day two (the first forest day), it was every man for himself. Nobody seemed willing to help anyone even if they were blocking the track. Day three, however, after a huge bottleneck, everyone was keen to help each other just to get through and save time.

It’s very cool to be riding with someone from the other side of the world. At one stage I was riding with a bloke from Mexico who only spoke Spanish, but we still helped each other through bog holes.

That’s racing, and the enduro scene is very supportive of each other on and off the bike. What kind of bike were you riding, and was it a good choice? In hindsight, would you make any modifications or changes?

I was riding a 2018 KTM 300 EXC TPI supplied by Red Roo Adventures Romania. I was a little worried about riding the TPI as I had ridden one in Australia and wasn’t impressed with it, but with the new mapping changes the bike was much better. A lot! How to ride the terrain better, where to ride faster, my weak points, where to focus my training… In short, I would work on strength training more to help in the creeks as you have to be strong on the bike but still be loose to maintain good balance and control. I would also work on being faster in the fast flowing terrain as I felt it let me down a little.

On a positive note, I felt on almost every hill I was able to make lots of places and to take different lines and ride around other riders. What was your training regime for the 2018 Romantic ?

The key thing with bike time was that it wasn’t just a ride, it was to push myself whenever I rode, to make sure I came home with no energy and not just a trail ride completed. I felt like my cardio was good for the race, but with Romaniacs you can never have enough fitness. Is it too soon to start talking about next year?!

I’d love to do it all again next year as I have learnt so much from this experience. One of the main things to overcome was being nervous before the race, and that won’t be an issue again. If funds allow, I’ll definitely go again. How can other riders get involved? Any parting words of wisdom?

Products In This Article